04/13/20: RUTGERS TODAY | Why Do So Many Pregnancies and In Vitro Fertilization Attempts Fail?

Why Do So Many Pregnancies and In Vitro Fertilization Attempts Fail? 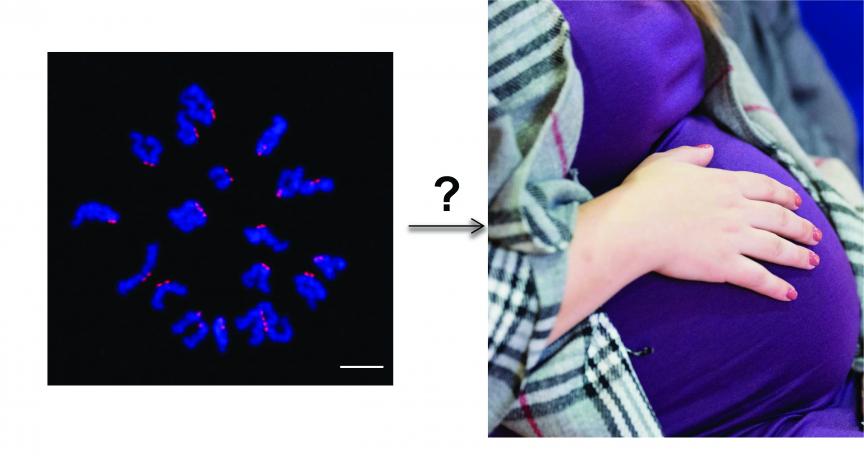 Chromosomes in an egg. Modeling can help predict how many eggs should be retrieved for in vitro fertilization to lead to a normal, successful pregnancy. Image: Cecilia Blengini and Kristen Driscoll

Scientists have created a mathematical model that can help explain why so many pregnancies and in vitro fertilization attempts fail.

The Rutgers-led study, which may help to improve fertility, is published in the journal Proceedings of the National Academy of Sciences.

Mistakes in female meiosis, the cell division process that creates egg cells, result in eggs with an abnormal number of chromosomes (too many or too few). This phenomenon is strongly associated with the repeated loss of pregnancies and the failure of in vitro fertilization (IVF) procedures, as well as developmental disorders such as Down syndrome.

“Our study demonstrates that in the future, mathematical models can be powerful tools for predicting the outcomes of in vitro fertilization for infertility patients and/or provide the basis for considering alternative family planning options, such as adoption,” said senior author Jinchuan Xing, an associate professor in the Department of Genetics in the School of Arts and Sciences and at the Human Genetics Institute of New Jersey at Rutgers University–New Brunswick.

“Modeling efforts such as ours can provide guidelines on, for instance, how many eggs must be collected during a single IVF cycle to ensure there will be at least one chromosomally normal conception,” said co-author Karen Schindler, an associate professor in the Department of Genetics and at the Human Genetics Institute of New Jersey.

A leading cause of early miscarriage is called aneuploidy, when eggs have the wrong number of chromosomes, and it’s also the main cause of IVF failure. The vast majority of eggs with chromosome problems are linked to errors in female cell division that increase as women age. Understanding how that happens is crucial because the average age at conception is rising in developed countries.

“Such basic knowledge is required to pave the way for future diagnostic and therapeutic innovations to improve human fertility,” the study says.

The model can be used to identify IVF patients who produce an extreme number of abnormal embryos. It’s also a powerful tool for understanding why abnormal numbers of chromosomes arise when cells divide and for predicting the outcomes of IVF reproduction. The model potentially could provide guidance for clinicians on the expected number of IVF cycles needed to get a normal conception for each patient. The modeling framework can also be expanded and adapted to address other processes, such as predicting errors in sperm.

Read the story on Rutgers Today.